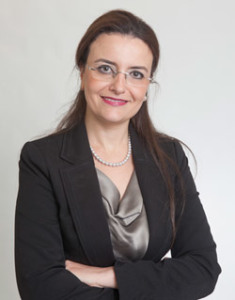 Professor Rym Ayadi is an Economist and International Expert on Inclusive and Sustainable Socio-economic Models, Financial Architecture and Stability and Sustainable Finance.

She is Professor at CASS Business School, Member of the Centre for Banking Research (CBR), City University of London, Senior Advisor at the Centre for European Policy Studies (CEPS), Chair of the European Banking Authority – Banking Stakeholders Group (EBA- BSG) and Founder and President of the Euro-Mediterranean Economists Association (EMEA).

She is also Associated Scholar at the Centre for Relationship Banking and Economics (CERBE) at LUMSA University in Rome. She is Founder and Director of the Euro-Mediterranean Network for Economic Studies (EMNES).

Professor Ayadi’s fields of expertise include inclusive and sustainable economic models, international financial systems, sustainable finance, financial markets and institutions, global financial regulation, governance and consumer protection, and socio-economic development and foresight in economies in transition. Her current research focuses on the redesign of a global stable, sustainable and inclusive financial system that better serves economic and societal long-term objectives and with a particular emphasis on the diversity of corporate and business models, private-public partnerships and financing models and the conditions for their success, SME financing and the role of financial markets to achieve developmental objectives and the impacts on business models in finance and role of financial regulation and resolution and impacts on incentives in the financial market. She also works on economies in transition, policy developments and foresight.

Professor Ayadi is international academic expert in several international high- level academic and advisory Committees and Boards. She is Academic Member of the European Shadow Financial Regulatory Committee (ESFRC), a shadow academic group of professors of law, finance and economics working on international financial regulation and financial stability, the European Banking Authority (EBA) Banking Stakeholders Group (BSG) of which she was elected Chair in February 2019, the European Commission’s Financial Services Users Group (FSUG), the European Parliament – Economic and Financial Committee and Committee on Foreign Affairs (EP Think Tank), the Parliamentary Assembly of the Mediterranean (PAM) and the Union for the Mediterranean (UfM), and an invited expert in international organisations including OECD and IMF, among others. She is also member of Finance Watch (FW) a Brussels-based NGO that strives to make finance serve the society since its set-up. She is also the Founder and Co-chair of International Workshop on Financial System Architecture and Stability (IWFSAS), an Annual Conference that provides a forum for academic researchers, practitioners and policy makers to discuss current issues related to the structure and design of financial systems and their impact on macro-financial stability and sustainable and inclusive economic growth.

Previously, 2013-2018, Rym served as Professor of International Business and Finance at the Department of International Business, as Director and Board Member of the Alphonse and Dorimène Desjardins Institute for Cooperatives, and Founding Director of the International Research Centre on Cooperative Finance (IRCCF) at HEC Montreal, Canada; as Senior Research Advisor at the Euro-Mediterranean University (EMUNI) (2015-2019) in Piran, Slovenia; and 2001-2013 as Senior Research Fellow and Head of Research of the Financial Institutions Unit at the Centre for European Policy Studies (CEPS), a policy think tank in Brussels.

She served as an academic senior expert member of the European Insurance and Occupational Pensions Authority (EIOPA) Stakeholder Group (Between 2011 and 2013). She was the promoter and director of the Mediterranean Prospects Research Network (MEDPRO) an international research network for foresight analysis in the Euro-Mediterranean region (Between 2009 and 2013) funded by the Seventh Framework Program of the EU. She was also Vice President of the European Financial Inclusion Network (EFIN), a European network that promotes mutual learning on financial inclusion which currently part of Finance Watch.

She authors several books and scholarly articles on her areas of expertise and is member of several editorial and scientific boards. Rym Ayadi holds a Ph.D. in Economics and Finance from University Paris Dauphine.

Move Over Data, Brain Capital is the New Oil

How Resilient are the Healthcare Systems in the Mediterranean? Cases of Algeria, Jordan, Lebanon, Morocco, Palestine and Tunisia

Statement by EMEA President on Covid-19